Kai was one in a million and we will always be grateful for what he taught us about the breed.  He got us hooked and he set us on the path to where we are now.  Our hearts are broken now that he is gone and we will all miss him terribly. 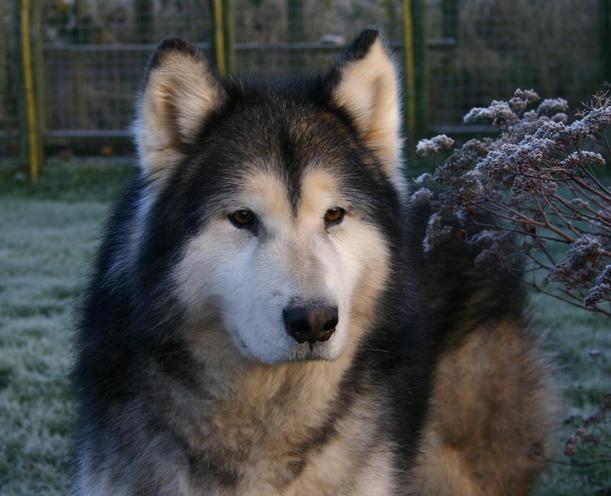 By Christmas, we had been persuaded to give showing a try.  He did OK and during his career he has notched up 12 x 1st places at Open Show Level
and in Championship Shows, 6 x 1st places and 2  Reserve Best Dog awards.  He qualified for Crufts each year that he was shown.  We retired Kai from showing in 2005 as he was never particularly happy flouncing around the ring!  He did return to the show ring briefly at the AMCUK Open Show in May 2010 where he came 3rd in a wonderful Special Veterans (10 years and over) class.  He did look so happy and really seemed to enjoy himself.

His dislike of showing was a disappointment as he possessed some very special qualities including his excellent tail-set, magnificent bone, superb coat and lovely head.  He was from a slow maturing line and took some time to fill out and fully mature into a striking example of the breed.  ​
At home Kai was a real teddy-bear.   He discovered quite late in life that he was actually bred to be a sled dog and enjoyed the winter months when he showed us all what he was made of.  He also took part in weight pull competitions and having initially lead us all to believe that he was struggling with even the lightest weight, he later, at the age of almost 9 years, gained 2 legs towards his WWPD.  After competing in only a couple of competitions during the 2008-9 season, he still managed to place 6th in the 81-100lb class at the Allerton Park Championship.